all subsribers - Your total number of subscribers. The formula to obtain this data is Engaged + Non-engaged + Subscribers under rehabilitation.

API key - It is a code passed in by computer programs calling an API to identify the calling program, its developer, or its user to the website.

average order value - The average price of all completed transactions during a specified period.

bounce - Refers to email messages that did not successfully reach their recipients.

bounce rate - The percentage of total users who the email was sent to and bounced. The formula to obtain this is: 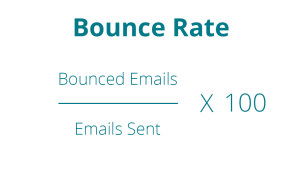 campaign - Refers to the total number of email campaigns scheduled.

cleaned - Describes a database that is free from low-quality email addresses. Email addresses have been removed from the list due to multiple soft or hard bounces. (An email can be cleaned from a list if it has soft bounced 10x in MailChimp).

clicked - The number of recipients that opened the campaign any number of times.

clicks - Total number of unique receipients who clicked on any tracked link in emails.

click rate - The percentage of subscribers who click an email out of the total number of emails sent. The formula to obtain this is: 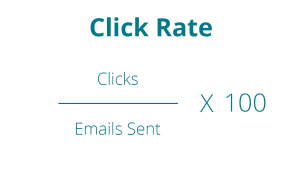 control groups - Web visitors who are not exposed to Ematic products.

conversion - The total number of transactions made within your email channel. This is directly pulled from the Ecommerce Tracking under the Email Channel in GoogleAnalytics.

conversion - The total number of transactions made within your email channel. This is directly pulled from the Ecommerce Tracking under the Email Channel in GoogleAnalytics.

conversion rate - The percentage of recepients who made a purchase after clicking a link in an email. The formula is Conversions/Total Unique Clicks.

dashboard - The short term for the Performance Dashboard.

delivered - The number of emails delivered to recipients’ inboxes.

delivery rate - The percentage of emails that have been successfully delivered and have not soft/hard bounced. The formula to obtain this is Total Emails Delivered/Total Emails Sent.

eligible - The number of unique users who are eligible to view an overlay.

emails collected - The number of new email names added to the database as a result of the Bye-IQ attempts (the overlays which are served to a user while browsing your site).

email revenue - The total revenue earned as a direct result from your email channel, tracked from Google Analytics.

engaged - Recipients who have been actively opening or/and clicking campaigns.

existing subscribers - The number of subscribers at the beginning of a defined period. Usually a month or day.

fatigued - Refers to a subscriber who has not responded to any of the email campaigns.

hard bounce - Occurs when the message has been permanently rejected either because: The email address is invalid OR the email addresses doesn’t exist.

inactive - Bye-iQ overlays that are not currently live.

lift - Refers to the formula used for understanding how much more converts have happened due to the marketing efforts.

Long Term Retirement (also: LTR) - Putting long term non-engaged or inactive subscribers in quarantine so they do not receive any email campaigns. These subscribers will not be removed from your database and can be later on pulled again.

machine learning - Machine Learning is a way of creating a program that does something, without you having to figure out exactly how to do it.

new subscribers - The total number of new subscribers who have been added to your list within a defined period. This is inclusive of Subscribers captured on Bye and otherwise).

non-engaged - Inactive subscribers who are not opening nor clicking any emails sent.

opens - A statistic that indicates the campaign has been opened and viewed by your unique contacts. When an email is opened with images turned on, an invisible open-tracker graphic embedded into your email is downloaded from our server. Each time that graphic is downloaded, we count that as an open on your campaign report.

open rate - The percentage of emails opened out of the total number of emails sent. The formula to obtain this is: 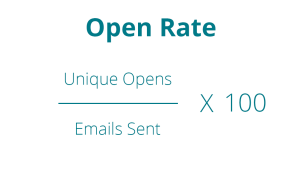 optimised users - A subset of the audience that has been identified as having the best chance of engaging with your campaign on a given day, for example, today’s mailing via Hi-IQ.

overlay - Is a window that opens when a user hits any of the set triggers.

pilot - The first few months of the customer’s partnership with Ematic. During this period, our CSEs implement the different products the customer opted into their website. This is also what other companies would call their “trial period”, however, Ematic charges for this period.

reactivate - To make a purchase again after a period of conversion inactivity. Purchasing a product or converting via a selling channel.

re-engage - To become engaged, respond or interested with email marketing campaigns again, after a period of non-enganement. Through opening or clicking a campaign email.

rehabilitation period - Refers to the time period a user is placed in a bucket that allows them to rest and NOT receive any email campaigns.

rehabilitation schedule - A rehab schedule is a set time where each user is put into different time-off periods based on their level of non-engagement.

segment - Refers to a category or label the customer has created to identify a group of users.

soft bounce - Means that the email address is valid and the email message reached the recipient’s mail server. However, it bounced because of any of the following:

time-off period - Refers to a timeframe where users who are identified as non-engaged do no receive any email campaigns.

total subscribers - Total number of subscribers at the end of a defined period. For example, month or day.

treatment - The different types of Bye-iQ overlay in an A/B test.

trigger - a customised event that can set off a Bye-iQ overlay. The triggers are: exit intent, scroll, time on site, and reverse scroll.

unsubscribe rate - The percentage of total users who the email was sent to and unsubscribed. The formula to obtain this is: 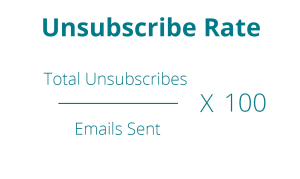